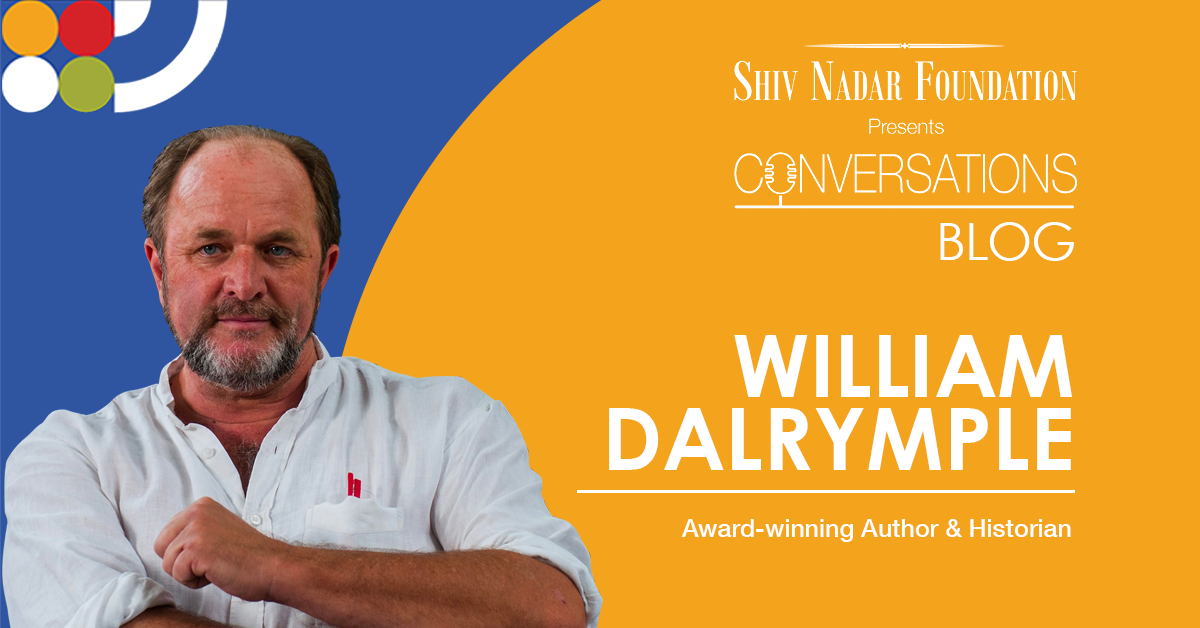 William Dalrymple is something of an expert on the 150-year old piece of Indian history that starts with the death of Aurangzeb all the way up to the establishment of the British Raj in 1857. With his four highly entertaining books on this subject, he has made history hip. Part of his secret is that he writes historical tales with contemporary parallels. When he was asked about this during the Shiv Nadar Foundation’s event Conversations on Facebook, he explained how each of his books related to a major modern happening:  he wrote White Mughals after 9/11, when the schism between east and west was at its deepest. Return of the King was written around the time western forces entered in Afghanistan. And his latest book, Anarchy comes out when there is much anxiety about the power of corporations and the way that Google and Facebook are harvesting our information. ‘It makes history more exciting if it’s seen as something affecting you today, and not dead in the museum,’ he says.

For the students and teachers of history in the Shiv Nadar Foundation’s institutes, it would be valuable to reflect on William’s philosophy. He thinks of himself as a judge when presenting history to his readers. He tries to be fair and faithful to the story and do his research well, often visiting battlefields and other places to get a sense of the landscape. He tries to balance his personal views with what his primary and secondary sources reveal to him. Then he chooses one version – out of the two or three that are always there – to go with. ‘Why you chose one over the other, you put in the footnotes,’ he says. The other method which comes in useful  is to believe the accounts of people who were there at the time. For example, take Siraj ud Daula, the Nawab of Oudh. Who doesn’t remember him as a hero from our school history textbooks, facing off against the British? But at the time, his own cousin said he was a brute. The French, the British, the Mughals disagreed on everything except for the fact that Siraj was a monster. Busting myths about the British and other historical figures and events seems to come naturally to him, too!

We, at Shiv Nadar Foundation, appreciate multifaceted personalities a great deal. Besides being a historian and author, William has several other interests and strands that define his work. Having made India his home for the last 30 years, (except for the summer when he escapes to Scotland) he is an invaluable part of the cultural fabric of today’s literary scene.  ‘I started as a travel writer, became a foreign correspondent, literary critic, a historian, a festival director (he is a director of the Jaipur Literature Festival), a photographer… and India accommodated all these different careers and I am grateful.’

He loves Delhi, and laughs when he remembers the ‘sarkari, very Punjabi’ town it was and how he has witnessed its transformation to a great capital. Besides it being the publishing and journalism hub of India, its vibrant culture and people have William hooked. He lives on a farm, keeps goats and pigeons and is currently working on his next book. This one is a departure from his skirmishes with the East India Company and the Mughals that he has concentrated on thus far. It’s about ancient India and how learning diffused out of here to other lands: this includes Buddhism moving north and becoming the state religion of China; Hinduism moving east forming the basis of the Hindu kingdoms of South-east Asia in Burma, Laos, Cambodia, Thailand, Indonesia; how Indian astronomy and mathematics moved westwards, first to Baghdad in the 7th century, where it became the basis for Arab mathematics, and then via Fibonacci to Florence. An interesting fact for our budding historians and mathematicians, too, the idea of algorithms originated in India too; translated and disseminated by from Sanskrit by the scholar al Khwarizmi (from whose name the term algorithm emerged!)

William is a pioneer when it comes to presenting history in an interesting manner, but he says now there is a new crop of writers creating excellent historical narratives that people are lapping up. ‘The key is to let the history speak for itself. There are incredible primary sources. History is fabulous stuff- I don’t know how have they made it boring for so long.’